Fresh out of high school, Babe Vogel should be thrilled to have the whole summer at her fingertips. She loves living in her lighthouse home in the sleepy Maine beach town of Oar’s Rest and being a barista at the Busy Bean, but she’s totally freaking out about how her life will change when her two best friends go to college in the fall. And when a reckless kiss causes all three of them to break up, she may lose them a lot sooner. On top of that, her ex-girlfriend is back in town, bringing with her a slew of memories, both good and bad.

And then there’s Levi Keller, the cute artist who’s spending all his free time at the coffee shop where she works. Levi’s from out of town, and even though Babe knows better than to fall for a tourist who will leave when summer ends, she can’t stop herself from wanting to know him. Can Babe keep her distance, or will she break the one rule she’s always had – to never fall for a summer boy? 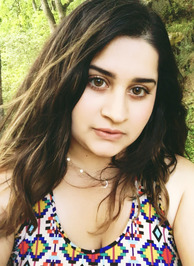 Lillie Vale, upon discovering she could not be one of Santa’s elves or attend Hogwarts, decided to become a writer to create a little magic of her own. Enjoying the romantic and eerie in equal measure, she’s probably always writing a book where the main characters kiss or kill. Born in Mumbai, she has lived in many U.S. states, and now resides in an Indiana college town where the corn whispers and no one has a clue that she is actually the long-lost caps lock queen. She can be reached on Twitter @LillieLabyrinth and Instagram @labyrinthspine. Small Town Hearts is her debut novel.

It was at the most beautiful moment of firefly twilight, when the sun had dipped just beyond the water, that I reached my best friend Penny Wang’s houseboat. It was far enough from the beach that we were away from everyone’s prying eyes, so Penny probably didn’t think twice before waving me onto the deck with a bottle of beer in one hand and her phone in the other.

*
“Hey,” I said, flip-flops thwacking against the pier.

*
“You took your sweet time getting here,” she said in response, tipping the bottle to her lips. She sat cross-legged on the deck, phone balanced on one thigh. “I was just about to text you.”

*
I joined her, sinking down and letting my back rest against the wall. “Everyone we know is out on the beach. Hard not to stop when everyone wanted to talk. Isn’t it weird how all the people we didn’t talk to in high school are suddenly acting like they’re going to miss us?”

*
Penny snorted. “Graduation messed with their brains.” She twirled her finger in circles next to her ear. “They’re living in some parallel universe where we give a shit.”

*
“Maybe in some universe we do,” I said, laughing.

*
She typed something furiously on her phone before turning it facedown on her thigh.

“All the me’s in all the universes hate them unequivocally.”

*
“That’s why you’re my best friend,” she said, bumping her arm against mine.

*
We stared out across the water, letting the silence last. I hoped she felt just as warm and squishy inside as I did. “So you won’t believe this,” I said.

*
“Elodie’s coming back home.” I let the bombshell drop, satisfied to see the surprise on Penny’s face.

*
She leaned closer toward me, clutching the neck of the bottle tight. “Really? She told you that?”

*
“Hell no. You know she didn’t want to keep in touch.” She’d snipped me out of her life so easily. Even a year later, the bitterness and hurt rankled.

*
Penny’s lips twisted into a scowl. “Ugh. Are you going to try talking with her again?”

*
“Good,” she said. “I’d have kicked your ass if you got back with her after what she put you through.”

*
“I mean, it was fine if she just wanted to break up,” said Penny. “But she didn’t have to be such a bitch about it. Cutting you out of her life like that was super shitty. She didn’t have the balls to date you while she was here, but she managed to break your heart with no problem.” She made an aggravated sound of disgust.

*
Penny smirked. “Any time.” She held the beer out with her right hand. “To summer. And graduation. And to never talking to any of those fuckwads again.”

*
I grinned and took a sip before handing it back to her. “And lying out on the beach and eating tacos and ice cream every day.”

*
This was what I loved about summer, the free pass to be totally lazy and do things only if we wanted to do them. And nobody could say boo about it. It was like the rest of the year was an impostor some- how, and summer was the only time that everything moved back into place.

*
The Korean steak tacos were her favorite, while I preferred the fish. Jeju BBQ was the only place in town that served street-style Asian tacos, and everything on their menu was pure rapture.

*
“Let’s go get some.” I bumped her shoulder. “Tacos are always a good idea.”

*
“I wish. We have something to do first, though.”

*
“If it’s more important than tacos, it must be serious.”

*
“Not kidding, B.” She paused. “Hey, so this is kind of awkward, but I was wondering if you could you do me a favor?”

*
I scrunched my forehead. Penny didn’t often ask for favors, at least not so obviously. So whatever this was, it had to be A Big Deal.

*
She didn’t meet my eyes. “Because I broke up with him.”